This is the Foreword for Dr. Rosalie Bertell: Planet Earth – The Latest Weapon of War. Enhanced edition, Talma, Dublin 2020: 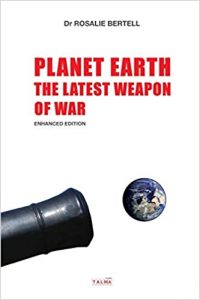 What an incredible joy and relief to see Dr. Rosalie Bertell´s ”Planet Earth – The Latest Weapon of War“ re-published in an updated version!

I could even say, finally published – as its first appearance in 2000 did not reach the international reader, because the publisher, The Women´s Press, London, went bankrupt and the book was available only in Canada (Black Rose 2001).

Indeed, this is an old book, but it contains so much information needed even more urgently today than in the year 2000! This book offers a detailed as well as a comprehensive analysis and description of the development of the most recent military technologies from the Manhattan Project of the atomic bomb to the ”New Manhattan Project“ of military geoengineering based on electromagnetic weaponry for environmental warfare. These new technologies and their ”civil“ applications, called the ”4th Industrial Revolution“ of today, including a so-called ”civil geoengineering“ that is concealing its military background, have started to threaten everything on earth: the climate, the atmosphere, the soil, water, plants, animals and, finally, us humans, as well. This book, therefore, is one of the most important books of the 21st century, and it is unique. It is a scandal that the world had to wait 20 years for it. So, ”Planet Earth” is published in its original version, updated with additional texts the author prepared until 2011.

The author, Rosalie Bertell, and myself encountered each other during the debate about the terrible earthquake that had hit Haiti in 2010, killing a quarter of a million people. Rosalie told me that she was able to explain what could have happened to Haiti. She sent me one of the few copies of her book then still available.  When I started to read it, my whole life began to change. I fell into a kind of hell I had not been aware of – the hell of technologies and weapons that have been invented and continue to be developed, refined and perfectionized in order to use the Planet and its own energies for a hitherto unkown, new type of war against humanity and in fact, against the earth herself. It is a secret and undeclared war. Here is the way Rosalie explained: In a new war one never uses the same technologies as in the previous one.

Today, our Planet is being transfomed into a gigantic War Machine, into a means of mass destruction, devastating itself at the same time. This happens, as the new war appears in the form of seemingly natural catastrophes of any type, affecting the planet and all life on it. The technologies used are defined as ”geoengineering, plasma weapons and weather wars“, based especially on the hidden inventions of Nikola Tesla (1856-1943), which enabled the use of pulsed electromagnetic waves produced in the installations of ”ionospheric heaters“ like HAARP in Alaska and in many other locations worldwide. Not acknowledging these installations and their functioning, as most scientists still do, means to not understand the enormous impact of the new weaponry which otherwise could not be explained. And, as Rosalie added, the military is always 50 years ahead of us!

Rosalie Bertell opens a completely new dimension of what is really occurring on earth that hardly anybody until today could have been aware of. She is able to do so because her research focused on studies of the environment, biometrics, and on public health questions. Bertell completed her studies with a Ph.D. at the University of Washington. For decades, she has worked as an expert consultant for the United Nations, visiting all the places on earth where industrial and environmental accidents had occurred, like Chernobyl, Bhopal, and many others. Rosalie Bertell travelled to more than 60 countries and reported on the accidents that had happened there, supported the social movements developing around them and stayed in contact with them for many years.

In 1985, Dr. Bertell completed her first big book: ”No Immediate Danger? Prognosis for a Radioactive Earth“, London, The Women´s Press. It deals with the dangers of low level nuclear radiation for human health which until then had never so far been analyzed in depth. She received the Right Livelihood Award for this work in 1986, the very same year of the nuclear accident at Chernobyl. In addition, she received many other awards in her life, including nine honorary doctoral degrees.

Rosalie´s well known independence in her thinking and her actions was also due to the support she received from the ”Grey Nuns of the Sacred Heart“ in Pennsylvania, USA, where she was a Catholic nun throughout her entire life. Additionally, she had founded the IICPH, International Institute for Concern of Public Health, in Toronto, Canada.

When I emerged from the hell Rosalie´s book had opened to my eyes, my mind and my soul, I decided to take an active stance and to fight. It was as if I had gotten a ”Call“ to do something about it. At a large women´s congress in Germany, I presented an analysis of Rosalie´s book and I proposed the founding of a ”Planetary Movement for Mother Earth“ in order to distribute Rosalie’s knowledge and to start a worldwide movement in support of our planet. Most of the hundreds of participants agreed to do so! We informed Rosalie Bertell who sent us the additional texts she had written in the meantime, and we started with the translation of her book ”Planet Earth” into German. Dr. Bertell declared me to be her legal representative in the German speaking world, and we succeeded in editing the book of 500 pages by the end of 2011: ”Kriegswaffe Planet Erde“, Gelnhausen, J.K. Fischer. Until 2018 we had produced four editions and 12.500 copies, including discussions of additional topics by other authors. In this way, we maintained the memory of Rosalie´s work which otherwise would have been practically lost.

We did not, however, find an English publisher, and in general, too, there was no broader debate on the issues raised in the book, although Rosalie had hoped for a new worldwide social movement to become active in the 21st century. I guess it is because the public discourse was always more occupied with the CO2-, ”global warming“- and ”climate change“- questions, a discourse that was disguising the fact that it is indeed military geoengineering as described by Dr. Bertell that produces the observed changes in the world. So, after a false global ”climate“- debate, organized from above, and the following false health debate during the global Corona crisis in 2020, also organized from above, it is now time to open our eyes to the facts. Otherwise we will have no chance to do something about the planned disasters that we all are threatened with from different angles at the same time.

We, as the Planetary Movement for Mother Earth, supported by our ”International Council“ (1) an informal circle of supporters, added our own analysis to Rosalie´s. We defined what she was describing as ”Military Alchemy“, a term she liked a lot. The same is true for applying to her work our general Critique of Patriarchy which Rosalie thought to be an appropriate approach. For us, Patriarchy is a utopian project that aims at transforming the world into an allegedly better one, by first destroying and then re-buidling it in a totally new way, but no longer appropriate for life as it is. The technologies used today, work from the human brain able to be attacked by microwaves up to the ionosphere attacked by different types of EM waves, all propagated as a change for the ”better“. The dying Ozone layer, the appearance of toxic UV-radiation on earth and the installation of military 5G- frequencies, supported from space, are examples of the consequences of such military alchemy in our daily lives, at the present moment and in the future.

Being a ”planetary“ movement, we of course have worked on more translations in other languages and publications in other countries as well. In 2018, we succeeded in organizing and helping to organize a Spanish edition of Bertell’s book in Mexico (Planeta Tierra – la ultima guerra, Guadalajara, La casa del mago), an Italian one (Pianeta Terra. L´ultima arma di guerra, Trieste, Asterios) and a French one (La Planète Terre, ultime arme de guerre, Paris, Talma).

Now, in 2020, we can anounce our 10th anniversary of the PMME, and we are peparing the 15th of our Information Letters on that occasion: Ten years of struggle to maintain the memory of Dr. Rosalie Bertell and to get her work published in English again!

In the meantime we have met with Patrick Pasin, a filmmaker, author, publisher and friend of Rosalie, and found out that it can be done! We worked together in producing ”Global Warning! Geoengineering is Wrecking our Planet“, a book with contributions by 10 women from all over the world, including a late contribution by Rosalie Bertell. This new book is being published together with ”Planet Earth” during 2020.

Rosalie died in 2012 at the age of nearly 84, but she still experienced her book being published in German which was of high significance for her because of the historical importance of German scientists involved in producing the new weaponry, and also because of her own family roots in Austria. Since then we are coordinating our Bertell-publication activities with a Sister and the President of her Order of the Grey Nuns of the Sacred Heart, as her heir.

Rosalie and I, we met only once, in Bonn, Germany, in 2010 at the 30th Anniversary of the Right Livelihood Award, where she proposed to sign the following petition:

“It is morally reprehensible and an offense against humanity and the Earth to interfere with the normal function of the planetary system – to cause or enhance storms, hurricanes, tsunamis, monsoons, mud slides, draught, flooding, earth quakes or volcano eruptions”.

The 22 laureates present from different parts of the world, all of them signed it.

Meeting Rosalie Bertell in person was for me like meeting a very old friend. It is because I share with her the same motivation, feeling and thinking about our Mother Earth: the indignation and pain about her ongoing destruction, the immense love for her, and the necessity of a general planetary upheaval in support of Mother Earth. For this we need exactly what Rosalie Bertell  embodied: a burning heart, a very clear mind and a ”planetary consciousness“ that knows about the Planet, our Mother Earth, as a huge living being, the ways she is endangered today, and the firm decision to fight for her life. What else? Mother Earth or Death!

This is what the reader of ”Planet Earth” should learn from its author. We need a world in which it is not necessary to write books like ”Planet Earth”, anymore!